I think this is a pretty good photo (with a bit of digital antiquing) of a split rail fence inside the Smoky Mountain National Park. I’ve visited this Mountain Farm exhibit at least 10 times over the years but I never tire of soaking my city mind in the calming, pastoral scene.

For every beast of the forest is mine, the cattle on a thousand hills. I know all the birds of the hills, and all that moves in the field is mine.—Psalm 50:10-11

This, however, was the first year I’ve seen a bull elk roaming the farm. These huge animals were extinct east of the Mississippi, but were re-introduced to the Smoky Mountains several years ago by conservationists. The photo below of this magnificent bull is, unfortunately, a fairly dull record of a thrilling moment. I’m glad he was on the other side of the fence. 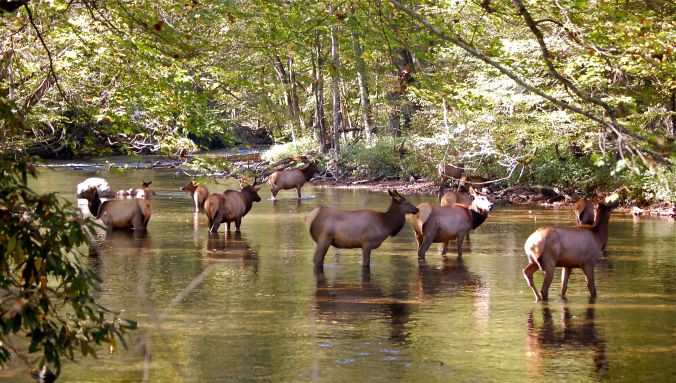 We found this herd of rogue elk deliberately ignoring the partial government shutdown! We caught them grazing in the Mountain Farm exhibit at the Oconaluftee Visitor Center, and resting in the Oconaluftee River. These elk shenanigans and the shutdown of Great Smoky Mountain National Park during our annual camping trip was enough to make me feel like a Grumpy Cat.