How much should a church reflect the culture around it?

Thought about that lately?

Well, church leadership types think about it, and disagree about it, all the time.

I think most of them are on board with the idea that a church should be enough like the culture around it to communicate clearly and effectively to that culture. It seems like a common sense principle, But “you know who” is in the details. 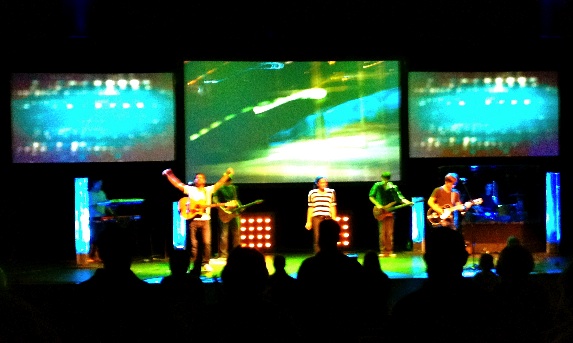 And here’s where I share a case in point…

There’s a local church in my area that occasionally sends me well-designed direct mail advertising promoting a sensible, relevant image of Christianity and their church. It’s a fast-growing, multi-campus Evangelical church that minimizes its denominational affiliation and takes a “seeker-sensitive” approach to congregational worship. That means they approach congregational worship as if it’s specifically FOR non-church people.

This past Sunday, my youngest daughter and I paid the nearest campus (which is a local high school for now) a visit.

As we entered, we were good morning-ed and welcomed by several folks in a non-threatening way. I took a few seconds to walk into the cafeteria where I noticed a walled-off area inside which I could hear the noise of children having a good time. Next to this, several people were sipping caffeine around a coffee bar displaying what looked like a Starbucks logo.

I paused for a moment, then turned to enter the auditorium. Good, we were 5 minutes early. I thanked the smiling man with the stack of Bibles to hand out, and informed him I had my own (YouVersion on my iPhone).

Then we passed into the auditorium which was lit and musically themed as if for a concert, dark and intimate. Soft aqua and lime spot lights focused attention on the stage while Cold Play provided the prelude.

At the advertised time a band — actually a first-rate, really tight band — took the stage and the amplified thunder began.

Yeah… It was loud.

It was energetic. It was really well-performed. The band members (who all looked twenty-something) played and sang with tons of sincere passion. The congregation (or, is it audience?) sang along as if at a concert, meaning, it was more like listening and reading words projected on screens with cool graphics than actual group singing. They performed, er… led four songs, one of which was a terrific re-mix of “Jesus Paid It All,” while another contained some questionable theology.

Then the Pastor took the stage. Here’s a treat! Turns out he was the “Executive Pastor” (remember the multi-campus thing?) making his rounds to this particular campus that day.

He preached on faith. He challenged us to believe. He asked us what we believed. He told us we might be one prayer away from God’s answer. He told us prayer was more about learning to be with God than getting from God, but still, somehow we needed to pray with more faith.

Then he prayed, “God, help us to pray like all the power of the Kingdom of Heaven is at our disposal.”

Announcements. Offering. Close with the band.

Here’s what I think this church was trying to communicate:

“God is really awesome and isn’t cool to know him… dude?”

It was church as a mall, church as day care, church as rock concert, church as coffee shop — all very relevant and familiar. But, the gospel message that presumably would gain a more favorable hearing from all this relevance was missing.

If the Hip Church becomes the average church, will it matter if we still call ourselves “Christians” (i.e. little Christs), or will “Generic, spiritual, sincere people of faith” do just fine?

In the Hip Church future, sincere people of faith probably won’t know much about God, what He’s all about, what He requires of us, what He’s done for us, or how to serve Him, or even how to find out.

15 thoughts on “The Hip Church”