Last Wednesday night at 9:30 PM we heard a knock on the front door.

I had one daughter in bed, another in PJs studying, and Dawn and I were in our PJs relaxing watching some BBC/Jane Austin thing again (yes, I like them, too) after a couple of stressful, out-of-routine days. I say, “knock”, because I had removed our doorbell for the painters who had spent all day and a good part of the evening prepping and spraying and brushing.

And so it was, that at the very moment we were shoe horning in some of our dearest family values – quiet, routine, safety, security, Jane Austin – at that moment, the knock on the door pretty much threatened all that. A knock on your door at 9:30 PM on a Wednesday intimates a sales pitch, an interruption, inconvenience, insecurity, not safe, not routine. Not, in short, welcome.

I answered the door well hackled-up. A teenager stood there.

“I live in the neighborh…” (as he waved indistinctly off to his right).

“I’ve been here eight years and I’ve never seen you before. If I see you in the neighborhood I’ll say, ‘hello’, I said in a tone that clearly said, “I don’t know why you’re here and don’t care. Leave NOW!”

I closed the door. I went back and settled down comfortably next to Dawn while guilt settled down uncomfortably in my heart. Now Dawn, motivated by safety-of-the-nest concerns, was relatively glad I had been a protective papa bear. But I could have been that without being Papa Jerk Bear.

“Even if he was lying to me,” I thought, “that’s no excuse for treating him that way.”

Next morning, the memory and guilt were, happily, gone…

Until Haley texted me from school. “You know that boy last night? – I know him.”

“He goes to school with me.”

“I sing in the choir with him.”

“He lives in our neighborhood.”

Now take that guilt and multiply it by infinity, like someone shoved a burlap bag o’ rocks in my chest.

Okay reader, let’s talk lessons learned. Some of you may think that I have an excuse: It was late. I felt concern for my family. He should have known better. All true, but not an excuse. I’m a follower of Jesus and that means two things:

And Jesus taught us about kids who knock on your door at 9:30 PM on a Wednesday. If said kid is an enemy, then “Love your enemies.” If he is your neighbor, then “Love your neighbor as yourself.” Either way, I gave in to fear, resentment, and insecurity and treated this kid with shameful spite and disrespect.

So, as soon as I can find out which house he lives in, I’ll be knocking on his door to apologize. I’ll let you know how it goes.

Why I Can’t Blow This Off

But, please don’t think that apologizing or blogging about this experience makes me “good”. I’m merely responding to Christ’s goodness to me, and there is no merit in that. You see, the Apostle Paul teaches that I was once an enemy of God (Romans 5:8-10), but  that Jesus forgives and loves Jerk Lon anyway, as His neighbor – actually better – as His friend, His brother, His child. That love compels me to confess my sin to Him, to trust Him to save Jerk Lon from the eternity I deserve (the bad news), and to love door-knocking teenagers as if the eternity I don’t deserve (the good news) makes a difference in the here and now – even on Wednesdays at 9:30 PM.

I’m not going to apologize to earn his or God’s forgiveness. I’ll do it because I’ve been forgiven. And that should make a difference. 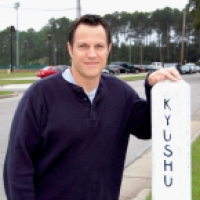 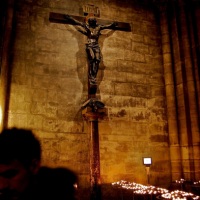 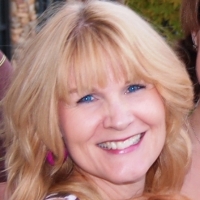 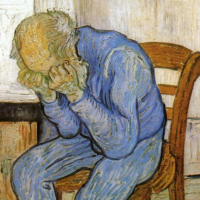